How to Freeze Tomatoes

I was talking to a friend and I was telling her that I was in the process of freezing some tomatoes and she was shocked to hear that they can be frozen.  Yes, you can freeze tomatoes!

Can you imagine having ripe tomato flavors even in the winter time???  You can if you freeze tomatoes fresh from your garden.

Freezing tomatoes is the easiest way to preserve tomatoes and gives you that fresh-from-the-garden flavor all year long.

I used to can all of my tomatoes but canning not only takes a lot more time and it heats up the kitchen and the last thing I want in the summer is more heat in my kitchen!  Freezing is a lot faster and takes no special equipment. 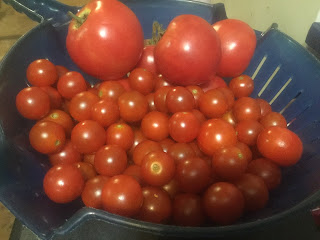 There is a downside to freezing tomatoes:  once frozen, the skins are not good for eating because the texture changes.  BUT there is no need to peel tomatoes before freezing them.  Once they are frozen, the skins just slip off.  I take the skins and dehydrate them and make them into tomato powder so nothing is wasted.

Using tomatoes after they are frozen won't work for a tossed salad but they do go beautifully into a soup, sauce, a stew, chili or some yummy salsa!    Again, the texture of frozen tomatoes changes but the fresh and delicious taste does not.  The taste is 100% there!!!

Another thing I like about freezing tomatoes is that you can freeze as little or as many as you want at a time.  If you just have 3 tomatoes, then freeze just 3 tomatoes.  If you have 50 tomatoes, freeze 50.  It doesn't matter.  You don't have to wait until you have "enough", just freeze them as you harvest them.

To freeze tomatoes, cut off the ends and place your tomatoes in a single layer on a cookie sheet.

Place them into the freezer on the tray for about an hour.  Remove the tomatoes from the tray and place into a freezer safe baggie.    Seal and try to get as much air out as possible and place back into the freezer.  That is all there is to it.  As you harvest more tomatoes, just continue through this process until your baggie is full and then start a new bag.  Currently we have 6 gallons of tomatoes in the freezer.

Tomatoes can be frozen whole as I did today or you can slice them, dice them, or even crush them before freezing.  It is purely a preference and how much time I have on my hands.

Frozen tomatoes will retain flavor for up to 12-18 months in your freezer. 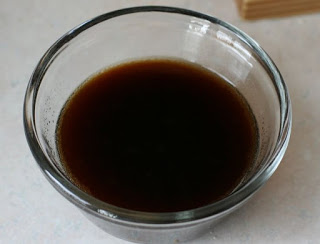