We recently had the privilege of reviewing a flashlight from Olight World.  The company graciously sent us one of their "baton" style flashlights, the "S15".  It is a rather small flashlight and to be honest, we were hesitant to believe that something that small could do much good.  Boy were we SURPRISED!  This flashlight is AMAZING!

The amount of light this little flashlight puts out will blow your mind.  We live in the country with no city lights to be seen.  When we go outside it is DARK.  Standing on our porch, when it is late at night, we can barely see in front of our faces.  We shined this light out into the woods and could see 75 yards through the trees easily.  IT LIT IT UP!
My husband served with the USMC and is a natural outdoorsman.  He tried it out the light and loved it.  He kept remarking about not only the brightness of the light but how sturdy it was built also.  He really liked the extender tube that was included so he could put 2 AA batteries in instead of just 1.  The light was just as bright with one battery but battery life is extended with the use of two.

It even has a flat end with a nice strong magnet on the end.  It's also waterproof  and has a moonlight mode!  Too cool!  Bad points?  NONE!  Would we recommend it?  HIGHLY!
Find Olight World on Facebook or their home page and tell them you heard about them from Countrified Hicks!

This is the best steak rub recipe to compliment the amazing flavors in your steak or use it to bump your steak up to the next level.  It... 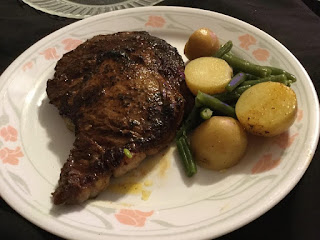